With Florida’s warm and sunny weather, it’s no surprise that many residents choose to ride motorcycles. In 2020 there were an estimated 620,077 registered motorcyclists in Florida. Unfortunately, the lack of protection on motorcycles makes them more dangerous in the case of an accident. Without airbags and the metal frame of a car, motorcyclists and their passengers are more exposed to elements and therefore have a high risk of injury. Additionally, the small size of motorcycles makes them susceptible to being in another driver’s blind spot. 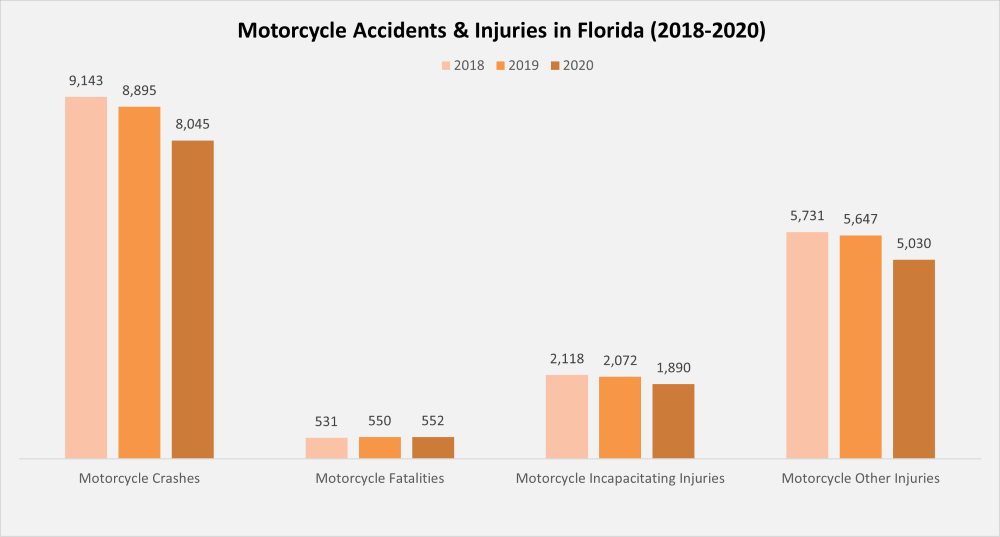 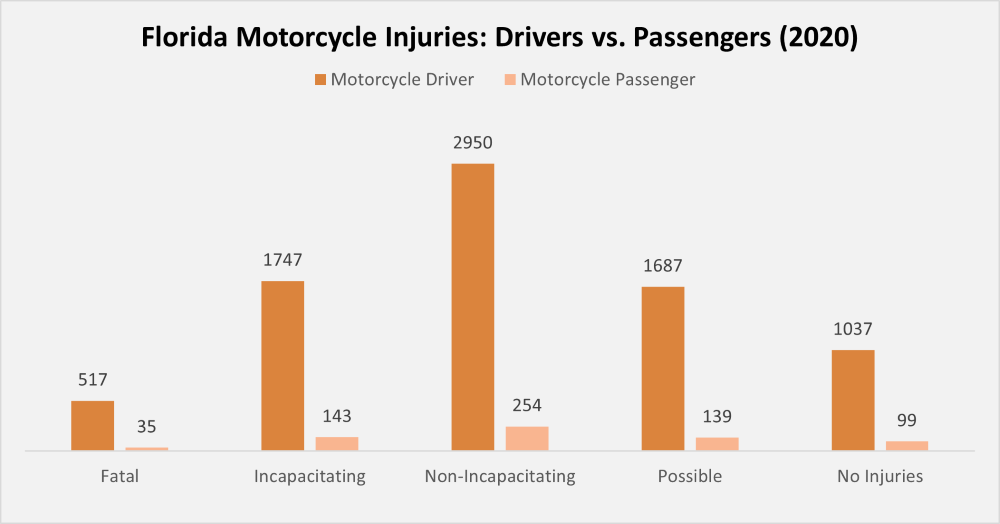 Because Florida is known as one of the most dangerous states for motorcyclists, we wanted to take a closer look at the breakdown of accidents per county. 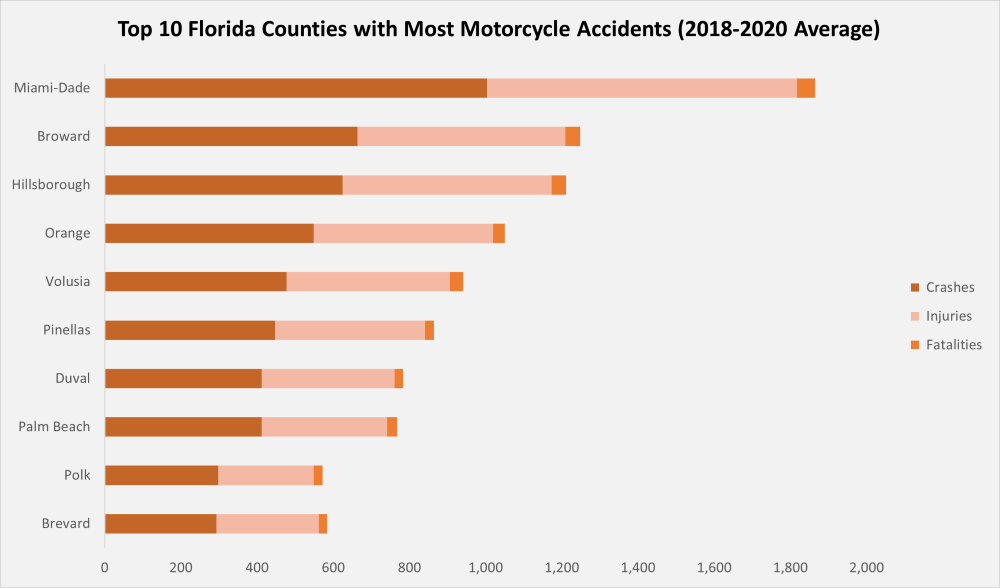 Motorcycle Accident Injuries and Helmet Use

The fit of the helmet is extremely important for providing proper protection. Additional safety gear like a thick jacket, pants, boots and gloves can also help prevent injuries in the case of a crash. 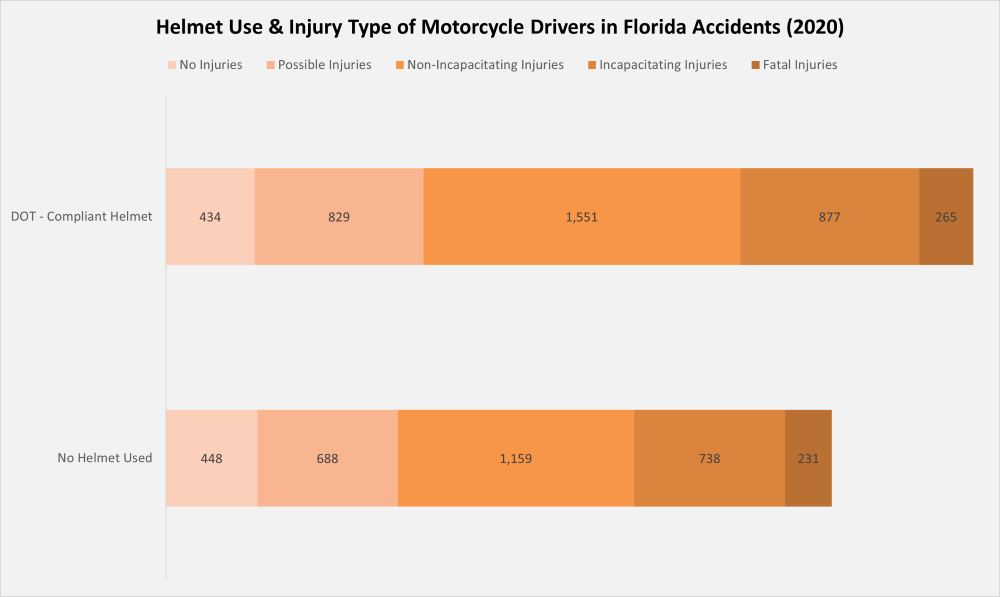 In addition to the data shown on the graph, there were 13 fatal motorcycle accidents where a non-DOT Compliant helmet was used, and 8 fatal accidents where helmet use was not specified. 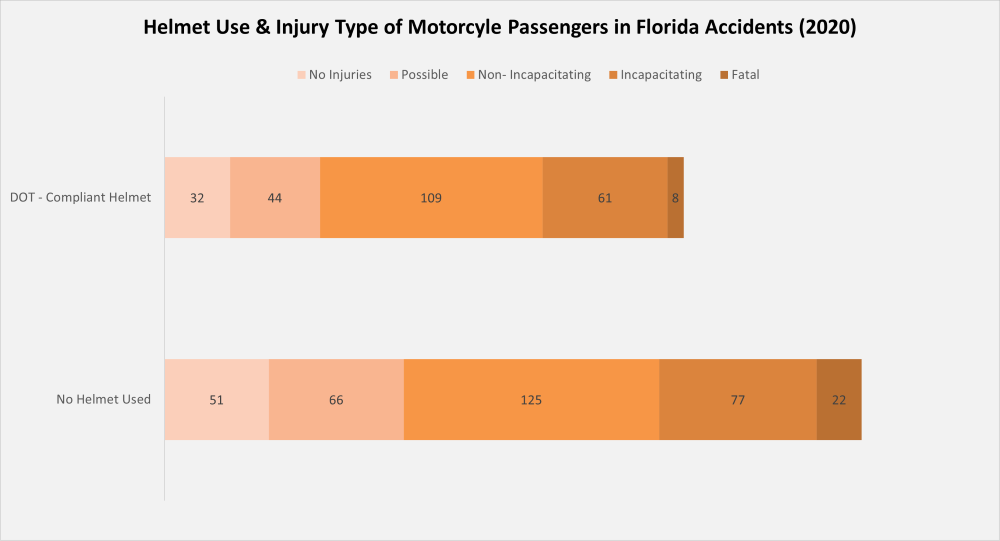 According to the data, motorcycle passengers who were involved in an accident were less likely to be wearing a helmet than drivers. Not shown are 2 fatalities where a passenger had a non-DOT compliant helmet, and 3 passenger fatalities where helmet use was not specified.

Percentage of Motorcycle Fatalities Per State Who Were Unhelmeted, 2019

In 2019, of the fatal motorcycle accidents where helmet use was known, the following table shows what percentage of fatalities were unhelmeted. Surprisingly, Florida isn’t in the top ten. 52% of motorcycle fatalities in Florida did not wear a helmet, which is tied for 13th place.

Top 10 States with the Most Motorcycle Rider Fatalities

The National Highway Traffic Safety Administration collects data for all reported traffic accidents in the United States. According to their data, Florida had the highest number of motorcycle rider fatalities in 2019, as shown on the graph below. 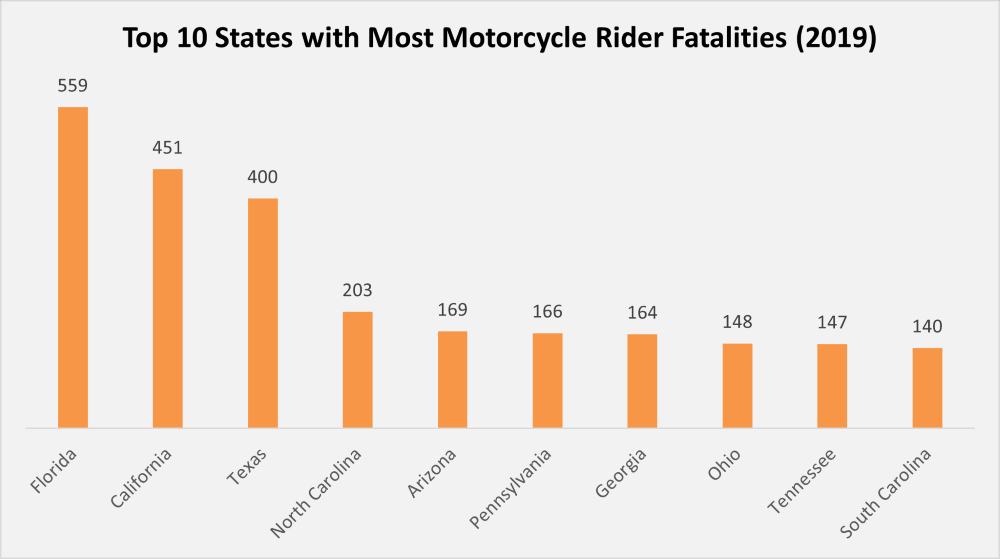 Which States Had the Most Alcohol-Impaired Motorcycle Fatalities?

When it comes to motorcycle fatalities where the driver was under the influence of alcohol, Rhode Island had the highest percentage with 64% in 2019. Similarly to the helmet data, Florida is farther down the list than may be expected with their high number of fatal crashes. Florida is tied for 32nd place with 27% of fatal accidents involving an intoxicated driver.

When operating a motor vehicle, no matter what kind, it is important to take responsibility for your own safety. Even if you follow all rules of the road, there are plenty of unforeseen obstacles that may require a fast response. Use the following safety tips to reduce your risk of an accident.

As a motorcyclist, it’s important to remember that you are not as visible as other drivers.

As a driver, it’s important to be aware of other vehicles around you.

If you are injured in a Florida motorcycle crash, contact the St. Petersburg motorcycle accident attorneys at Salter, Healy, Rivera and Heptner.